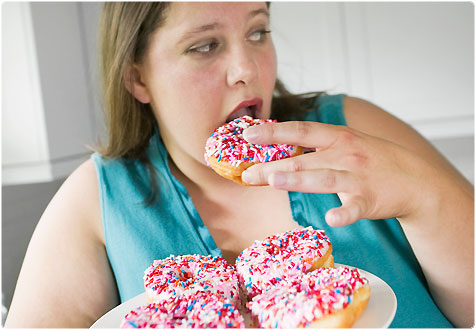 Do your weight loss clients struggle with binge eating? Binge eating, or uncontrolled eating of large quantities of food over a short period of time is an issue affecting people of all sizes. New research from the United States casts a bit more light on this complex topic, testing how symptoms of depression, eating styles and body mass index relate to patterns of binge eating.

The binge eating assessment asked respondents how many days in the past week they “rapidly consumed an excessive amount of food with an experience of loss of control.” Depressive symptoms were measured using the Depression Scale-Short Form (CES-D), and eating styles were assessed using the Dutch Eating Behaviours Questionnaire (DEBQ). This questionnaire clarified emotional (eating in response to feelings) and external (eating in response to qualities that relate to the food) eating patterns.

The key parts of this study were:

Each of these variables were analysed to understand where they might be linked. For example, people were grouped according to low and high body mass index, and then levels of low and high external or emotional eating amongst those groups were analysed. Each group was further mapped against their lower or higher levels of depressive symptoms.

This research shows is that there may be value in community programs delivered to any person who engages in binge eating – irrespective of their body mass index. It also indicates that programs which help people to manage emotional and external eating patterns (with a focus on eating in response to internal cues) and those which assist with management of depressive symptoms may be part of the key to address binge eating behaviour in an effective way.

Can Your Gut Bacteria Predict Your Weight Loss Success?

Low-energy diets are often used for weight loss interventions, but the success rate can vary…

The Issue of Male Obesity

When it comes to dealing with the battle of the bulge, men over 40 are…

Can A Gluten-Free Diet Help With Weight Loss?

One of the most popular dietary exclusions is gluten. Although originally it was used for…